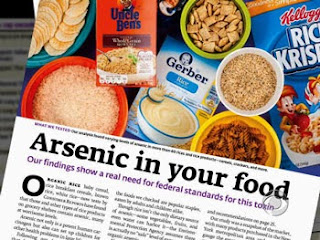 In my last blog, I discussed arsenic exposure and the largely unknown issue of arsenic in rice. Fortunately for rice eaters, which probably includes most of us, you can reduce your arsenic exposure without having to abandon your favorite rice dishes! That being said, if rice makes up the majority of your diet, it certainly isn’t a bad idea to mix in some alternative dishes (e.g. pasta, other grains). So what is the key to removing arsenic from your rice? Only a very simple adjustment of your cooking and food prep.

First, rinse your rice prior to cooking. Rinsing rice in water at a 2.5:1 water/rice ratio prior to cooking can reduce total arsenic levels by 10%. Second, and even more important than rinsing, cook your rice in excess water. You are probably used to cooking rice until all of the water boils off, at which point the rice begins to steam. This cooking method unfortunately retains all of the arsenic, which is not what we want. Instead, cook your rice with an extra cup or so of water and then pour off the excess water once the rice is cooked. This can reduce your arsenic exposure by a whopping 40%! With this method, much of the arsenic accumulates in the excess water, which is then disposed of down the kitchen drain.
What if you prefer the steam process from the original cooking method? Well you don’t have to pour ALL of the water out. Simply pour out most of the excess right before the rice is done, then you can proceed to let the rice steam in whatever remaining water you left in the pot. This will do about the same for reducing your arsenic exposure.
Keep in mind that cooking rice with excess water is inherently more wasteful of water and energy, as well as takes longer, compared to the normal method. So be sure not to overdo it with the excess water. If you’re cooking one cup of rice in about three cups of water, then just adding an extra cup of water should be fine.
Through this blog I don’t mean to downplay the role of groundwater in arsenic exposure, particularly if you live in states such as New Hampshire which have high bedrock arsenic. In such areas, it is important to keep in mind that the Safe Drinking Water Act only regulates drinking water municipalities serving greater than 25 homes. So if you drink water from a small or private well, it is worth getting your water tested. For everyone else, the most likely source of your arsenic exposure is probably through eating rice.
Finally, it is worth noting that brown rice reportedly has higher arsenic levels than white rice. Given the nutritional benefits of brown rice compared to white, however, I wouldn’t recommend abandoning brown rice in the name of arsenic. Rather, I would recommend employing the above cooking techniques, where you achieve the best of both worlds.
If you’d like to read more on this topic, there is plenty of peer reviewed literature out there. I recently attended a lecture at Harvard by Dr. Margaret Karagas, who chairs the Department of Epidemiology at Dartmouth’s medical school. She is a leading expert on arsenic exposure and has conducted a lot of great research on the topic of arsenic in food.

Arsenic in Rice - Cause for Concern

Arsenic is an element with widely recognized toxicity. While most often associated with groundwater contamination, especially in places like India, it turns out that exposures in the U.S. are also not trivial. But how can this be, given that America has the U.S. Environmental Protection Agency (EPA) and the Safe Drinking Water Act? Because water isn’t the issue for most Americans, it’s the food. And currently no U.S. regulations exist for monitoring arsenic in food. What is the main food to watch out for, you ask? Unfortunately, a food that has become a staple in our diets; that is, rice. And among rice crops grown around the world, U.S. rice has the highest arsenic levels! In this blog I’ll talk about why that is and what specifically the health effects of arsenic exposure are. In my next blog, I’ll then highlight how one can reduce his/her arsenic exposure while not having to cut back on rice consumption. It’s really just a matter of cooking technique. 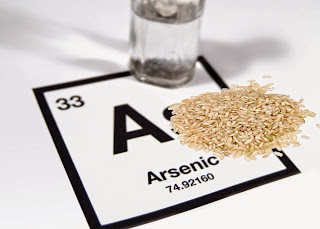 Arsenic is a semi-metallic element that, while naturally occurring, also enters the environment through pesticide spraying and other industrial processes. In its inorganic form, it is recognized to be a Level 1 human carcinogen by the U.S. EPA, linked to cancer of the bladder, lungs, skin, kidney, nasal passages, liver, and prostate. Non-cancer toxicity can produce discolored skin, stomach pain, nausea, vomiting, diarrhea, numbness in the hands and feet, partial paralysis, and even blindness. In other words, arsenic is something you definitely want to avoid! And according to recent studies, there appears no safe level of exposure. That is, your risk of developing cancer is proportional to your arsenic intake.
What’s more, the average person in the U.S. consumes about a half cup of rice per day. Given the arsenic levels in some U.S. grown rice crops, this equates to drinking 1 liter of water containing 10 ppb arsenic (10 ppb is the maximum arsenic allowed in U.S. drinking water). Clearly then, arsenic exposure through rice warrants some concern.
Arsenic exposure is of particular importance to pregnant women as this toxicant can cross the placental barrier with ease. On the bright side, studies show that arsenic does not readily enter breast milk. So once the baby is born, one needn’t worry about exposure through breastfeeding. In fact, reports show breast milk to contain less arsenic than milk formulas.
So how is arsenic turning up in our rice? First, due to the crops physiology as well as the biogeochemistry of the rice patty fields, rice itself tends to preferentially absorb arsenic relative to other crops. That U.S. rice has the highest arsenic levels, however, is largely thanks to the agricultural industry’s historic spraying of arsenic pesticides to cotton fields and orchards. Unlike many toxic agents which break down over time, arsenic is an element and therefore does not deteriorate. So once it is released to the environment, it’s there to stay. Not surprisingly then, many U.S. agricultural fields remain contaminated with arsenic.
Be sure to tune in next week to learn how you can reduce your arsenic exposure and still eat your favorite rice dishes!