GMOs: What Are the Risks?

GMO stands for “genetically modified organism.”  In the context of food, GMOs are plants or animals whose genetic information has been modified, or genetically engineered, usually to produce a greater yield or increase processing efficiency.  In other words, to increase company profits and usually reduce consumer costs.  Unfortunately, however, with such biotechnology has come concern for human health and the environment.  In the in particular, whether you know it or not you’re consuming GMOs or products made with GMO ingredients on a daily basis (even a can of coke uses high-fructose corn syrup made from GM corn). The important question then is, what are the risks associated with GMOs, or put another away, can we trust Frankenfoods?  The news fortunately isn’t as bad as you might think and is in fact much different than most people suspect.  Note that in the interest of keeping things short, this will be a 2 part blog.  In this first blog (Part I) I’ll discuss plant GMOs while the topic of animal GMOs will be reserved for Part II. 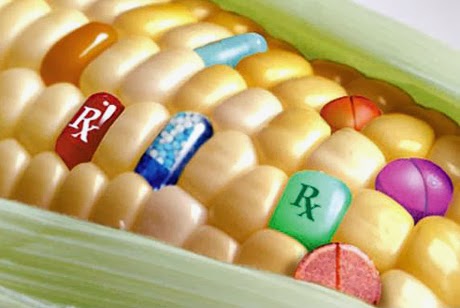 A primary means of increasing crop yield through genetic engineering is by preventing damage by insects.  In fact, in the over 90% of our corn and soybean crops are genetically engineered for this purpose!  Such engineering is usually accomplished in one of two ways, either by engineering plants to be pest-resistant or engineering them to be pesticide resistant, or both.  The main issue with engineering a crop to be pest-resistant is the potential that the gene of interest may be an allergen to some individuals.  Further, there is the potential when imparting a pest-deterring protein into a crop that the gene itself will cause unforeseen toxicity to human health.  At present, there isn’t much scientific evidence that supports the existence of such effects.  While this doesn’t guarantee that these effects aren’t occurring, it at least doesn’t suggest reason to sound the alarm (the “not so bad” side of the story).  That said, some find the lack of scientific investigation into such effects coupled with the incredibly widespread use of GMOs to be reason for concern.  A valid perspective.
While the above concern is no-doubt valid, what strike me as more disturbing are the implications of pesticide-resistant crops.  These crops are imparted with a gene that allows farmers to essentially spray the hell out of our food without worrying about damaging the plant. Sure, the plants are resistant to the pesticides and come out okay, but what about the people who eat them?  Crop yields go up, profits increase, but at whose expense?  Not the agricultural or pesticide industry, that’s for sure.  And let’s not forget about the ecologic effects of pesticides running into streams and lakes or the indirect human health effects of pesticide-contaminated drinking water and air.
Beyond the impacts described thus far is the concern of imparting antibiotic resistance genes into our food and ecosystem.  When desired genes are inserted into an organism, they are usually tagged with an antibiotic resistant gene.  This enables biotechnologists to test whether a plant has successfully incorporated the new gene by growing the plant in the presence of antibiotics.  If the plant grows, then the gene transfer was a success.  The concern that arises with this process is due to the possibility that bacteria in the environment as well as bacteria in the guts of humans and other animals will pick up this antibiotic resistance.  The prevalence of anti-biotic resistant bacteria has in fact increased quite dramatically in recent years, causing alarm among medical practitioners who are finding it increasingly difficult to treat certain bacterial illnesses.

Monsanto’s Roundup Ready™ seeds are probably the most heavily marketed pesticide-resistant crops on the market.  By no coincidence, Monsanto also owns the particular pesticide (Roundup™) these crops are resistant to.  So a farmer who purchases Roundup Ready™ seeds will also need to purchase Roundup™, both products of Monsanto.  And since the crops are resistant to Roundup™, a farmer will actually purchase even more pesticide than usual.  An all-too-beautiful system for the agricultural powerhouse.
Recently Monsanto, along with the largest food and beverage companies, broke a record.  By spending $22 million to oppose a state bill that would require labeling on products containing GMOs, the group contributed the largest amount of money even spent on an initiative in the state’s history!  Their money paid off as the bill was subsequently defeated.  Monsanto was the single largest company donor, spending $5.4 million on the opposition’s campaign.
Monsanto has gained an increasingly bad reputation with the public and smaller farming industry for not only their role in showering the nation with GMOs and pesticides, but also for their ever-increasing monopoly power and consequent ability to influence the political system relating to agriculture and food.  The spread of GMO crops has not only put many small farmers out of business, but Monsanto has successfully sued neighboring farms when their patented seeds have blow into nearby fields and sprouted “stolen” crops.  Monsanto seeds are also an issue for organic farmers whose fields are sometimes contaminated when GMO seeds blow into their farmland. 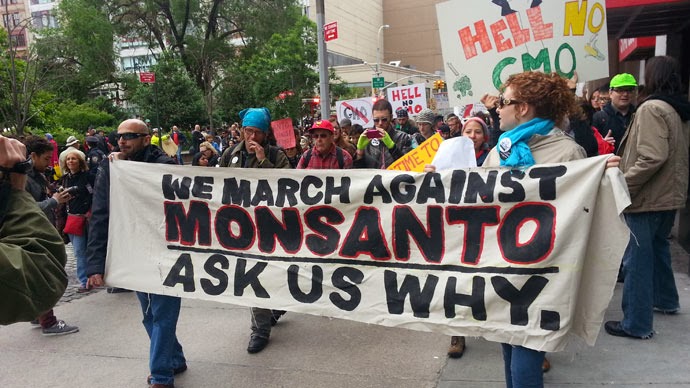 The benefits of GM Crops

Though this blog is intended to shed understanding on the risks associated with GMOs, it is at least worth noting some benefits of agricultural biotechnology.  Aside from pest protection, crops are often modified to express desirable nutrients.   In this way, genetic modification has positive potential in malnourished areas.  Sure, nourishing genes such as vitamin precursors are also of benefit in the developed world, but their importance is truly secondary to that of nutrient enrichment in the developing world.  A well known innovation exemplifying this is Golden Rice.  Globally, up to 500,000 children go blind each year as a result of vitamin-A deficiency.  This is mostly in impoverished regions of East Asia and where cheap vitamin-A deficient foods such as white rice constitute an immense portion of the native diet (vitamin-A is an essential micronutrient in the development and maintenance of vision).  Golden Rice, however, is a form of rice that is specifically engineered to express beta-carotene (the vitamin-A precursor).   Though Golden Rice is still undergoing research and testing, and therefore has yet to hit the market as a commercial product, if it were to be substituted for ordinary rice in rice-dependent regions of the world where blindness is rampant, the positive impacts could be tremendous.  This certainly represents utility for biotechnological innovation.
Closing Thoughts

Though GMOs have been approved for consumption and use as ingredients in food products throughout the U.S. and other nations, some food companies have taken it upon themselves to omit their use.  Just last year ice cream maker Ben & Jerry's pledged that it would strike GMO ingredients from its products.  Additionally, restaurant chain Chipotle said it would phase out GMOs this year. Whole Foods has pledged to label all products in its stores with genetically engineered ingredients by 2018.  And just recently, even General Mills pledged to avoid GMO grain and other ingredients from its classic Cheerios cereal beginning 2014, undoubtedly representing the largest win for those opposing GMOs.
In general, agriculture is a multi-billion dollar a year industry.  And like any industry, the goal is to maximize profits.  Particularly in the , the immense size of the agricultural industry is only matched by its lobby power and influence over food regulations. Consequently, different biotechnologies are rushed through the approval process each year in the U.S., the burden of protection falling on government agencies to later prove toxicity rather than on industry to preemptively prove safety.  Where in the world is quality control and consumer protection?  In the short time frame in which new chemicals and technologies are studied prior to hitting the market, it is virtually impossible to ensure safety.  Only acute human toxicity can be assessed, while cancer and other long term consequences are left unknown.
The human body is an extremely complex system, becoming only more complex with the introduction of foreign chemicals.  It may very well be that most GMOs are perfectly safe.  And by and large, they probably are.  However, their indirect consequences should not be overlooked and their direct consequences should receive more thorough investigation, particularly considering that GMOs and pesticide-laden food products are reaching nearly every household in the world and being consumed on a daily basis.  When exposure is so widespread, even the most seemingly benign exposures can translate to astronomical risks.  This is in fact plainly visible in the very equation that calculates risk (Risk = Toxicity x Exposure).  For this reason, it seems prudent to employ greater regulatory caution and dampen the adoption of GMOs and pesticides in the marketplace.
In countries of rampant malnutrition, the unknown risks posed by GMOs are almost certainly outweighed by their benefits.  However, in other countries such as the United States, GMOs represent nothing more than increased processing efficiency, higher profits, and monopolization for companies that are able to engineer and patent their own crop genes.  This is best exemplified by Monsanto, which essentially owns soy beans in the U.S. now and controls most U.S. corn production.  European countries have already taken initiative by rejecting a number of GMOs and chemicals that haven’t been investigated thoroughly for safety.  What’s more, chemicals that Europe has approved have only been allowed after mandatory proof of safety by industry.  This is in accordance with Europe’s newest REACH legislation, which takes a much more precautionary approach to public health and safety than America’s TSCA regulations.  It is time the U.S. steps up now and puts public health ahead of private interests.