If you’ve heard of climate change, you’ve probably heard of the “tipping point.” But what does this mean? To understand, you must first understand earth’s “positive feedback” systems. Let me explain. 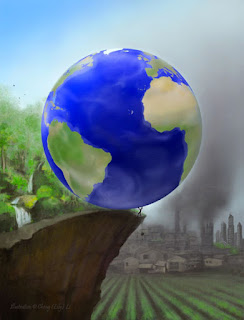 This brings us to the so called tipping point, or what is often thought of as the point of no return. That is, the point beyond which humans will have any real control over continued climate change. Right now, the main driver of global warming is human activity. However, once we reach a certain point and unlock the carbon in the tundra, as well as propel many of these other positive feedback systems, humans will have little say in how much our climate warms. Our efforts will be of negligible importance. Releases of permafrost methane, a shrinking of earth’s “mirrors,” and a more humid atmosphere are just a few of the many processes that will secure the fate of our climate.

Triggering the permafrost to melt is probably the most frightening scenario given the enormous reservoir of carbon waiting to enter the sky. A true tipping point will have been reached. We'll have unleashed the giant. Melting of the snow would then accelerate. Dying of the forests would increase. The atmosphere would gain humidity only humidity. And all these processes would only accelerate each other, as positive feedbacks do. It’s a frightening prospect to say the least, but a very real one. And only underscores the importance of current climate action efforts.

So when is the tipping point? It’s any scientist’s best guest. But evidence suggests it’s sometime soon, if we haven’t already reached it. We are playing with fire, as they say. We are quite literally conducting a global experiment.