Recently, the world witnessed tragedy in Houston as Hurricane Harvey battered the Texas coast. Lives were lost, pets vanished, and entire neighborhoods were wiped out. It was just last summer that I visited Houston, staying at my friend’s gorgeous house. Through video last week I saw that house underwater. The very room I stayed in was a lake. My jaw dropped at the site. According to scientists, Harvey broke records, dropping more rain than any storm in contiguous U.S. history. To locals it was a nightmare. But did the storm arise by chance, or was there more to it?

As I watched T.V. coverage of Harvey, I couldn’t help but notice an elephant in the room. Reporters were making no mention of climate change. For years climate scientists have been warning of increased hurricane intensity with climate change. Just a month ago Al Gore was even featured on CNN saying the same thing. Yet here we were after Harvey, and it was quiet. No mention of climate change. As a scientist who follows this issue, I’ll therefore do my duty to report and help fill the gap in media coverage.

The International Panel on Climate Change, or IPCC, is the international authority on assessing the science of climate change. Assembled by the United Nations and World Meteorological Organization, the IPCC has been warning of increased storm severity for years. In its most recent report, it cautions that rain events will become heavier and more frequent in various places. Though hesitant on strong conclusions, the report goes on to express its confidence that severe North Atlantic cyclone activity has increased over the last half century. Other studies less hesitantly implicate human-induced climate change for these trends. 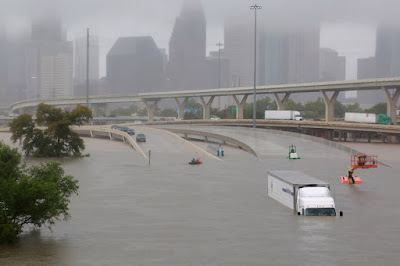 So, why are hurricanes predicted to intensify under a warmer climate? It's actually rather simple. Hurricanes are fueled by heat. That is, they get their energy from the warm ocean surface. As the climate warms and ocean temps follow, a hurricane that would normally be mild, can instead become severe. More extreme ocean temps mean more extreme storms.

That extreme rain and hurricane events will intensify with climate change has been such a consistent warning by climate scientists that it is all but mind blowing that mainstream T.V. has left it out of discussion. 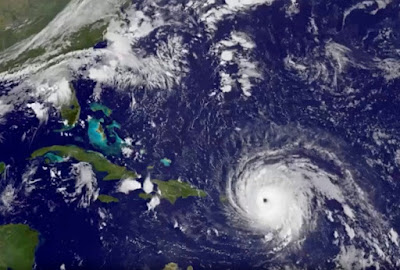 So where does this leave us? At the moment, one of the largest hurricanes ever recorded is making its way to Florida. With nearly 200 mph sustained winds, Hurricane Irma already ripped through numerous small islands, leaving death and massive damage in its wake. There’s no telling what’s in store for Florida, but most signs point to destruction. According to a European prediction model updated this morning, Irma’s path is following the “worst case scenario” in terms of where it’ll make landfall in Florida. An American model predicted a slight deflection out to sea, which would mean a bit less for Florida, but a dead shot for the Carolina’s as it banks left up north. In short, the U.S. will be slammed, it’s just a matter of where.

Please, share this post. We must trust our climate scientists and listen to mother nature. We must become informed, empowered, and mobilized, and vote for policies that will transition us away from dirty fossil fuels. If policies are not on the table, we must vote for politicians who put them there. To learn one way you can get involved in climate action in your own community, look up your local Citizens’ Climate Lobby chapter!