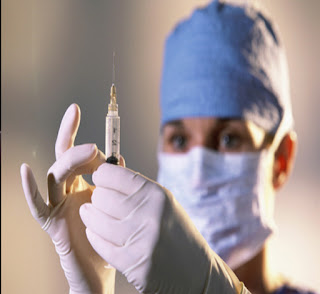 The primary source of ethyl mercury, and the source which has gained the most attention as it relates to this chemicals role in public health, is through vaccinations.  For a number of decades, a compound known as Thimerosal has been used as a preservative in numerous types of vaccines.  It is this preservative which contains the ethyl mercury ion and is in turn the source through which most people, in particular children, are exposed.
The reason for incorporating a preservative into vaccine formulas in the first place is to prevent microbial growth in the event that a vaccine is to become contaminated; usually through repeated puncture of multi-dose vials.  Though Thimerosal has been used in various biological products, including vaccines, since the 1930’s, it was not until 1968 that the requirement for using such preservatives in multi-dose vaccines was officially incorporated into the United States Code of Federal Regulation.  In recent years, however, the has taken many steps in transitioning to Thimerosol-free vaccines; sometimes switching to single-dose vials that do not require preservatives (A single-dose vial refers to a vial which is good for administering only a single dose of vaccine.  Since a single-dose vial is not repeatedly punctured for multiple uses, there is virtually no likelihood for contamination and therefore no need for a preservative to kill pathogens).  Most countries, however, have yet to make this transition.
What is likely of greatest concern to many families as it relates to ethyl mercury exposure, due in great part to the media attention it has received, is the association between childhood vaccines and autism; specifically, those vaccines administered to prevent measles, mumps, and rubella (MMR) diseases.  This association, however, is still dubious at best.  In fact, when the formed an Immunization Safety Review Committee to investigate this link several years back, the committee concluded that the data did not support any such link between vaccinations and autism.  Now this cannot guarantee that vaccinations have no relation to autism as there is always the possibility in science that a study may simply have failed to pick up on given association. Given the best available evidence to date, however, there is no reason to believe that vaccines are linked with autism. That said, fearing to approve your child’s vaccination is not justified by the weight of research on this topic. The likely reason parents attribute their child’s autism to vaccines in the first place is due to a coincidence that autism becomes detectable at about 2 years of age (when deficiencies in a child's speech are first apparent), the same time when children receive MMR vaccines.
Regarding this topic, it is worth noting that measles, mumps, and rubella were three previously devastating diseases which have now been controlled in many places thanks to their vaccines (preventing thousands of deaths in the alone!). Furthermore, the importance of Thimerosal in such vaccines is also worth noting as there have been numerous instances of children dying within days of receiving unpreserved vaccinations later found to be contaminated with living bacteria.  In short, neither vaccines nor Thimerosal should be discredited as both substances have played critical roles in saving lives.  If you are still inclined to avoid this preservative, however, there are a couple of options you have which do not require avoiding vaccinations altogether.