Talk of “chemtrails” has become an increasingly hot topic in certain public arenas. While there is some truth to the issue, there are also so many falsehoods, contradictions, and nonsensical arguments surrounding the topic that it has unfortunately become difficult to discern fact from fiction without expertise in environmental pollution or atmospheric science. Since my focus in graduate school happens to be environmental pollution, and even more specifically atmospheric pollution, I thought it natural, if not my responsibility, to finally shed light on this issue.
There are a number of ways to dive into the topic, but I thought it best to take the main claims by chemtrail theorist, analyze them one by one, and ultimately discern whether we have “chemtrails” or “chemspiracy.” As I began writing, it soon became apparent that I would need to divide this into three different blogs. There are so many claims, and therefore so much to discuss. Below, I have briefly introduced the idea of chemtrails and explained the physics that leads to either the forming or not forming of condensation trails in the sky. In my next blog, I will discuss the prospect of chemtrails being a government conspiracy to target certain populations. Later, I will address other claims surrounding chemtrails, such as high aluminum in the soil and the issue of geoengineering the atmosphere, some of which has merit, and some of which does not. 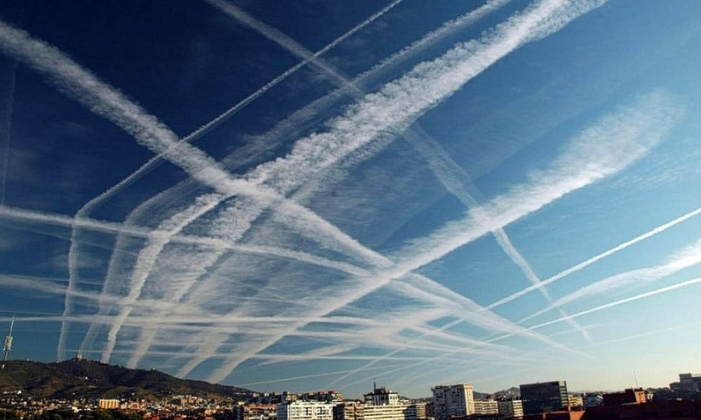 What is a “Chemtrail?”

The word “chemtrail” is a spin off the word “contrail,” short for “condensation trail,” which refers to the long trails of condensation that airplanes and jets sometimes leave in the sky. The word “chemtrail” was adopted to reflect the idea that contrails are not mere trails of condensation, but rather trails of toxic chemicals that are purposely sprayed into the atmosphere. Some suggest that the government is behind the spraying while others suggest it is industry. This is where different theories split off, but you get the point. By the way, while I may use the term “chemtrail theory” for simplicity in this blog, we are not actually talking about a true theory by definition, but rather an idea or belief discussed among the public.

Why Some Planes Leave Trails, and Others Do Not

That some planes leave trails while other planes flying nearby do not is often used as support for the idea of chemtrails. However, there is another explanation. One that is no mystery at all, and certainly no conspiracy. These planes are flying at different altitudes and therefore areas of different relative humidity (RH). Condensation forms under conditions of high RH. That is, when the atmosphere is saturated with water. This condition is more likely when the air is cold. I’m sure you’ve noticed your car exhaust, or your own breath for that matter, to be visible on cool mornings or after a rain. This has nothing to do with the chemical makeup of your breath or your car exhaust, except that both contain water vapor. Yes, when your car burns fuel, it produces water vapor. This is one of the chemical products of hydrocarbon combustion. When this warm water vapor, either from your breath or car, is released into a cool or otherwise humid environment, the vapor condenses into visible water droplets. This is the same reason airplanes form contrails in the sky!
Although a rare occurrence, some people say that even when planes are flying at the same altitude, one plane may produce a trail while another does not. First, a person at ground level cannot truly tell that two planes are at equal altitudes unless he/she knows the relative sizes of the two planes. You may think you can, but you cannot. Even when planes seem very close to one another, they can easily be thousands of feet apart. Second, even if two planes were hypothetically flying at very similar altitudes, or near each other, they could still be flying through parcels of air that are meteorologically different, leaving a condensation trail in one case and no trail in the other case. If you do not believe that two adjacent parcels of air can be so meteorologically different as to produce differences in visible condensation, then you do not believe in clouds in the sky.
Lastly, you will notice that on some days there are visible trails all over the sky, while on other days there are none. This is not because on some days every plane has suddenly become a “chemtrail” plane, but rather because on some days the local atmosphere suddenly becomes relatively humid throughout (a weather front has arrived), while on other days it is dry. In short, science can easily explain contrails without the need of a “chemtrail” theory. That said, being able to explain condensation trails on a scientific basis is not in and of itself enough to completely refute the chemtrail theory. However, it certainly does not provide evidence for it and should not be used to support the existence of chemtrails. What remains to be dissected of chemtrails will be left for discussion in my next series of blogs.