Before getting into Part 2 of this chemtrails blog series, I want to remind the reader that I write these articles as a public health advocate and proponent for the environment. There are sadly a number of public health and environmental atrocities that occur each day, and which we should most certainly be concerned about. That said, it is important that we don't get so carried away with pointing our fingers as to identify atrocities that don't really exist. This is a waste of energy that can be usefully directed to important issues. As for chemtrails, lets again dissect some of the claims one at a time, and decide afterwards if this is anything more than mere public conspiracy. Or as I've referred, "chemspiracy." 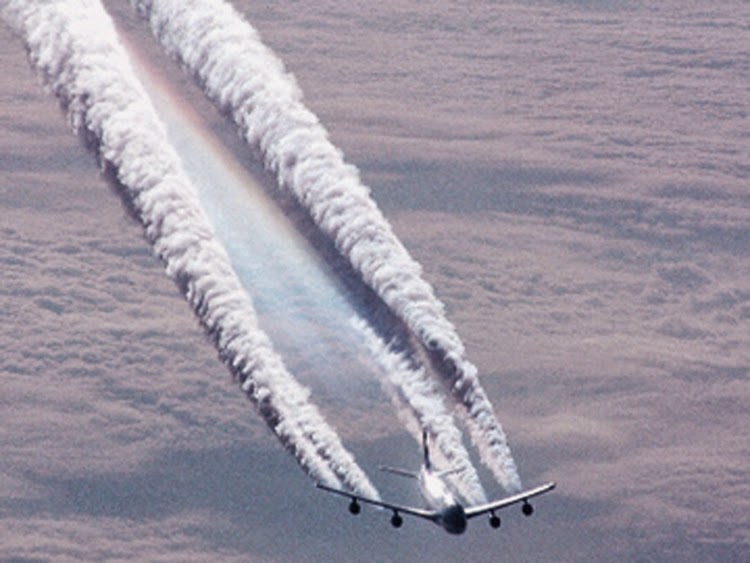 Chemtrails as a Government Conspiracy

It is first important to note that chemtrails do not need to be visible to be toxic. In fact, most chemical air pollution is invisible in the environment (i.e. ozone, carbon monoxide, pesticides, CFCs, nitrogen dioxide, VOCs). In other words, if you want to believe that airplanes are intentionally spraying chemical agents into the sky, the presence of a visible trail is entirely unnecessary.
Second, it is critical to realize that if the government or industry were trying to target the poor (as I’ve heard) or any other “experimental” populations, that there is no such thing as a “target” from ten-, twenty-, or thirty-thousand feet up. Perhaps bombs can hit targets from these altitudes, but a fine chemical spray cannot. Even at altitudes of one- or two-hundred feet air pollutants do not readily descend to the ground and onto local communities. This is the concept behind smokestacks on factories. They disperse pollutants. And this is why the Environmental Protection Agency’s law some years ago to require even higher factory smokestacks (to reduce local pollution) is recognized by scientists to have increased the regional (as opposed to local) pollution problem in the country. Because the pollutants, while missing local communities, were still carried by winds to other states and regions. Having said that, when it comes to “chemtrails,” particles of such size released at such altitudes would not have a shot in hell of landing on any target community, but rather would enter large-scale jet streams and other winds, spreading homogeneously around the globe and not settling to the earth for weeks to come. This is not a hypothesis. This is particle physics, which is well understood in atmospheric chemistry. So if the government were trying to control the public by mind-altering chemicals or poisonous gases, or otherwise affect the population through chemtrails, it would necessarily be inflicting the same consequences on itself.
As to the claim that “chemtrails” are simply a government/industry way to dispose of hazardous waste, I can assure you that there are much more cost effective ways of disposing of such waste than putting it on a jet engine and flying it around the sky. And there are also much more secretive ways of doing so that do not involve advertising it over the public in broad daylight. Finally, when proponents of the chemtrails theory are asked why scientists aren't talking about this, the explanation is usually that they are "in" on the conspiracy. I will try to refrain from mockery, but really?? Thousands of scientists from all over the world are all successfully keeping chemtrails a secret? Watergate leaked in months with only a few people involved, yet thousands of people have kept chemtrails a secret for decades? Something as large as a global chemtrails experiment wouldn't remain secret for a day! And would so many scientists really be willing to accept secrecy and complacency at the expense of their own health and the health of their families and loved ones? These are the very same people who have blown the whistle on government and industry countless times in the past. Need I say more..? 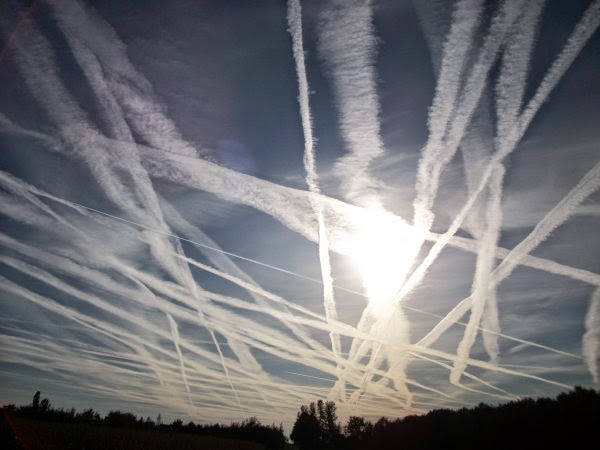 Aluminum in the Soil

It has been alleged that high aluminum concentrations in surface soils are proof of heavy metal atmospheric spraying. As an air pollution researcher, I can tell you that if you want to learn about chemicals in the air, then you measure the air. Not the soil. That said, there is more than an ample amount of scientific air pollution literature, including a soon-to-be-published study of my own, that documents the types of pollutants we measure in the atmosphere. And true, aluminum is one of them. So is vanadium, nickel, mercury, cadmium, iron, zinc, lead, etc. Metals are all over the atmosphere. They are kicked up from the soil by winds as well as emitted directly into the air by human activity. In fact, I can’t think of a single pollutant in the sky that can’t be traced back to a known human or natural source.
Pollutants don’t get much more neurotoxic than mercury, nor do they get more carcinogenic than dioxin. Yet, waste incineration and fossil fuel burning are constantly injecting these chemicals into the air we breathe. And NOT at twenty or thirty thousand feet, but at ground level in and around our communities! This brings us to a troubling realization regarding the previous topic; that the government doesn't need to conspire to pollute our air, because our own actions and the actions of industry are already doing it…and not in secret, but in the wide open, and with citizen approval (or lack of protest). That is, the cars we drive, the trash we burn, the types of foods we eat, and the types of industries we support through our purchasing decisions are the real players driving air pollution. My earlier blog (http://shahirmasri.blogspot.com/2011/10/conserving-energy-for-better-health.html) provides some tips on reducing pollution through energy conservation.
In the 1960’s, a grassroots movement was initiated by Americans who were sick of pollution and environmental destruction. This movement translated to the sweeping environmental laws of the 1970’s and the establishment of the U.S. Environmental Protection Agency. As a result, our air and water quality improved dramatically. If today we are sick of the latest chemical threats to our health and environment, then we need to once again mobilize and put pressure on our government and industry. Or at least identify and get involved with groups such as the Sierra Club that are already doing so. It is critical, however, that we focus our passion and energy on issues that are truly threatening our health, of which there are many (i.e. fossil fuel combustion, agricultural pollution, unregulated use of chemicals in cosmetics and other products). NOT “chemtrails.”
As is hopefully becoming clear, when chemtrail claims are broken down and scrutinized at face value, the theory breaks down as well, becoming little more than unfounded conspiracy. The only claim surrounding chemtrails that I have found to have any merit whatsoever is that related to geoengineering, which I will discuss in my final chemtrails blog next week. Until then, stay green!