In my last blog, I talked about greenhouse gases (GHG) as an important driver of climatic variation. Well, what about natural variation? Earth's temperatures have gone up and down in the past, so what if the current warming trend is just part of a natural cycle? Well, let’s discuss.

Aside from GHGs, three distinct physical cycles have historically played a key role in earth’s major climate fluctuations. Collectively, these are known as the Milankovitch cycles, and include the following:

Precession (P) – If you’ve ever spun a top, you’ll notice as it slows it wobbles. Much like a top, the earth too spins with a slight wobble. Much slower than a top, however, the earth completes one full wobble about every 26,000 years.

Axial Tilt (T) – Earth is currently titled at about 23.5 degrees from vertical. This  in fact gives rise to our seasons! As it turns out, this angle is not fixed, but rather fluctuates back and forth by a few degrees over time. One full fluctuation takes approximately 41,000 years.

Eccentricity (E) – You all know that earth orbits the sun. What you may not know is that the shape of this orbit changes from oval to more circular at predictable cycles. One cycle takes about 100,000 years to complete. 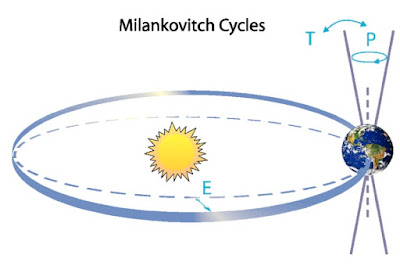 Notice the above cycles occur at frequencies of tens of thousands of years. In other words, while the earth has warmed over the last two centuries, these three natural cycles have essentially remained constant. In fact, the current orientation of the Milankovitch cycles actually favors cooling, not warming. But again, these cycles are slow, and essentially play no role in recent temperature changes.

Are there any other natural drivers of climate change? Sure, solar cycles. In contrast to the Milankovitch cycles, solar cycles actually occur at a much higher frequency—about every 11 years. In this case though, they occur too frequently to explain the gradual warming of the past couple hundred years. What then is the ex factor driving current climate change? Turning again to my last blog, we discussed GHGs. These gases are also known to be major drivers of climate variation. And, in fact, their concentrations in the atmosphere correlate perfectly well with the temperature changes we've observed.

In a perfectly unbiased and politically neutral society, we would accept this with little resistance. It is quite clear and makes perfect sense. In a world influenced heavily by major industrial players who have high stakes in the game, however, this sense has been passionately battled.

Let's recap! When we look at natural drivers of climate variation, they don’t explain the rapid increase in temperatures we’ve experienced in recent times. Those committed to refuting climate change, however, often cite such cycles as evidence against the major causes. And unfortunately, most people aren’t familiar enough with the issue to correct this fallacy. Hence, this blog! I hope I’ve informed you such that you can now inform others and refute the fallacy.

In my next blog, I’ll present the temperature trends of the earth both in recent and ancient times as well as provide historical carbon dioxide concentrations. We will also discuss the implications of present day GHG emissions.