Starting today, the last Tuesday of every month will be "Toxic Tip Tuesday!" Perhaps not as cool as Taco Tuesday, but valuable nonetheless. Short but sweet, each Toxic Tip will concisely lay out a new evidence-based way you can better your health!

Steer Clear of the Smoking Rear

That is, avoid driving directly behind large vehicles such as cargo trucks, buses, and construction vehicles when you're on the road. Why?... read on!

In 2008 I participated in a major air pollution field study led by my atmospheric chemistry professor Dr. Winer (one of my favorite profs!). As an intern for this study, my job was to drive around designated streets in downtown L.A. to measure air pollution. Yes, with probes and monitors abound, this meant piloting what you might call a "Back to the Future" mobile! I never failed to catch the eye of a passerby. Accompanied by a post-doc, I would often switch to passenger seat where I got to monitor the measuring equipment. It's what I frequently observed on the monitoring screen that I will share with you now. 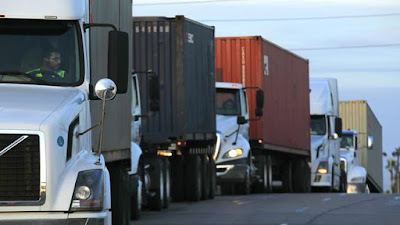 While driving down random streets of L.A., one of the pollutants we measured was ultra-fine particles (UFP), which are not good to breathe! At times during our drives, UFP concentrations would suddenly spike to extremely high levels. I'm not talking about doubling or tripling, I mean jumping up 10 times background levels! Sometimes levels would even increase by 30 times! What was causing these extreme spikes in on-road pollution you ask? Large vehicles. School/city buses, cargo/shipping trucks, construction vehicles, garbage trucks, etc. These giant vehicles were exhausting giant pollution! We often think of compressed natural gas (CNG) buses as "clean," but these too were major culprits. The worst though were diesel vehicles. In spite of this blog's title, pollution was often invisible.

So what's the takeaway? It matters where you drive! If you drive directly behind these dirty giants, you'll be subjected to incredible levels of pollution. Instead, merge to another lane. At the very least, slow down to allow a gap for dilution between you and them. Dr. Winer's official study publication estimated that dirty vehicles accounted for about 30-50% of on-road UFP exposure even though such vehicles were encountered only about 5-15% of the time while driving (Hu et al. 2012). Click on the study for more details. If you look you'll even find me in the "acknowledgements" section! :D